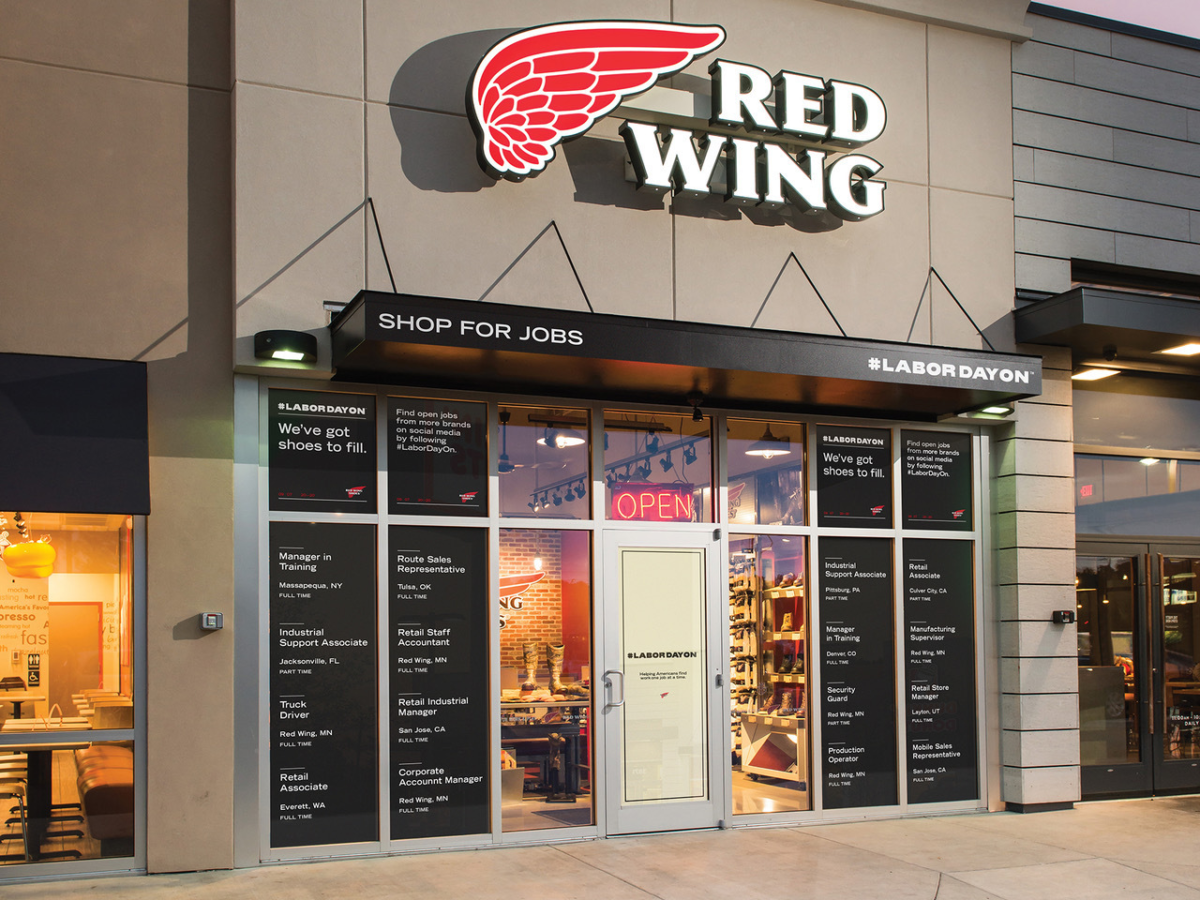 It’s been another weird week in retail. Red Wing has a fresh take on Labor Day campaigns, Snoop Dogg takes gin and juice to the next level, and Miller Lite imagines a ’70s-inspired rental.

Among the slew of Labor Day deals and discounts that are flooding consumers’ inboxes and social media feeds, one company aims to use the holiday to promote something else.

The company is transforming its more than 525 stores into job centers and turning its customer service line into a job search hotline to offer free guidance and connect individuals to open jobs. But the brand can’t make a meaningful difference alone, Red Wing Chief Marketing Officer Dave Schneider said.

That’s why the retailer is calling on other companies to join them in taking to social media to post available job postings. While many associate the holiday with a day off, Red Wing is challenging others to join its initiative, #LaborDayOn.

“Red Wing knows that by shining the light on even just one job opportunity, this could be the first step in an opportunity for someone to find work and support their family,” Schneider said in a statement. “Our hope is to start a movement and leverage our own channels to highlight these jobs and help Americans end Labor Day on a high note — with a new job to celebrate.”

As of Wednesday, the company said more than 50 brands joined in, including General Mills, Sleep Number, Burger King and New Balance.

More and more celebrities have entered the alcohol market in one way or another.

Well, the artist is at it again with another venture into the category. Snoop Dogg this week announced the launch of his new brand, Indoggo, marking the rapper’s first owned and operated alcohol project.

This isn’t the hip-hop artist’s first foray beyond music. In addition to his collaboration with 19 Crimes, the artist partnered with Dunkin’ to promote its Beyond Meat products and developed his Casa Verde Capital investment fund. But this latest project couldn’t make more sense. After all, he is the king of “Gin & Juice.”

“When I wrote ‘Gin & Juice’ back in ’94 it was about good feelings and real experiences, it just naturally became a global anthem,” Snoop Dogg said in a statement. “When creating INDOGGO, I wanted to give those feelings new life with an approachable juicy gin that’s smooth like the D.O. Double G.”

The product will first drop in California in late September and then continue across the country into early 2021.

Miller Lite partnered with Hotels.com to create a ’70s-inspired pad. The Miller Timeshare, the beer company explained this week, is aimed to transport guests to a more “carefree” time: 1975, aka the year Miller Lite was first introduced nationally.

It features everything to send fans back in time: mod furniture, an avocado-colored kitchen, wood paneling and shag carpet.

“End of summer travel looks a little different this year,” Courtney Dugan, director of activation for Miller Lite, said in a statement. “But it’s still time for Miller Time, so Miller Lite created the Miller Timeshare, a groovy space for a small group to get together, put on a record, crack open some beers, and escape 2020 for a couple days.”

The place has a view of Mona Lake, Michigan, and is a short distance to Detroit and Chicago. It’s bookable for up to three nights between Sept. 10 and Sept. 30 for $96 a night, but fans should act fast as the company said booking will only be available on a first come, first served basis.

The campaign follows a trend of brands jumping into the hospitality business. Earlier this year, movie rental company Blockbuster said it was offering fans the opportunity to book a night in its last store through Airbnb. And last year, Taco Bell opened a hotel in Palm Springs, California.

It also feeds into the creative efforts brands are forced to pursue in an attempt to broaden their reach and lure more customers. Many have leaned into apparel collaborations seemingly in an effort to turn fans into walking billboards. Dunkin’ last year teamed up with sneaker brand Saucony to release a special shoe in honor of the Boston Marathon, Ben & Jerry’s in May collaborated with Nike for a shoe inspired by the ice cream brand, and most recently Champion teamed up with General Mills to drop a collection featuring our favorite cereal brands.