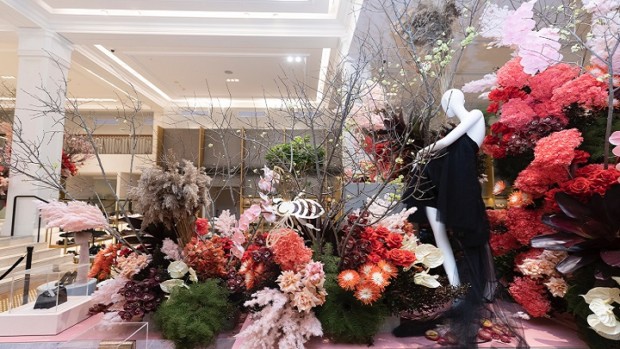 The hives, managed by the local business The Urban Beehive, are being populated by local New South Wales relocated rescue bees.

David Jones has also introduced virtual guided tours led by horticulture experts, with behind-the-scenes content to be made available at the retailer’s site.

“The David Jones Spring Flower Show is a time-honoured tradition that we are proud to once again bring to life for customers, both in-store at the Elizabeth Street flagship and now virtually via davidjones.com,” said Aaron Faraguna, David Jones Retail director.

“The evolution of the Spring Flower Show demonstrates our ongoing commitment to our customers across all of our touch points, and we look forward to sharing this celebration of spring for the 35th year.”

According to David Jones, the event this year celebrates the bee.

“It’s the small but mighty mascot of spring whose role in industry and environment span from their critical role in the pollination of cotton for clothing, production of beeswax for beauty products and candles, through to the delicious honey enjoyed around the world for hundreds of years,” the company said.

George Low of Seed Flora led the team of 15 experienced florists who collaborated with David Jones for its official flower show.

Several David Jones brands have joined the celebration, including Slip, which released a limited edition exclusive bee-embroidered eye mask, and Sensori+, which launched a David Jones Spring Flower Show candle with all profits to be donated to the Wheen Bee Foundation.

Louis Vuitton is also presenting a colourful animation this year featuring its legendary monogram flower motifs. The house’s iconic collection of leather goods will be on display on Level 7 where customers can also meet with a Louis Vuitton personalisation expert, who will paint select items with exclusively created motifs to celebrate the annual event.