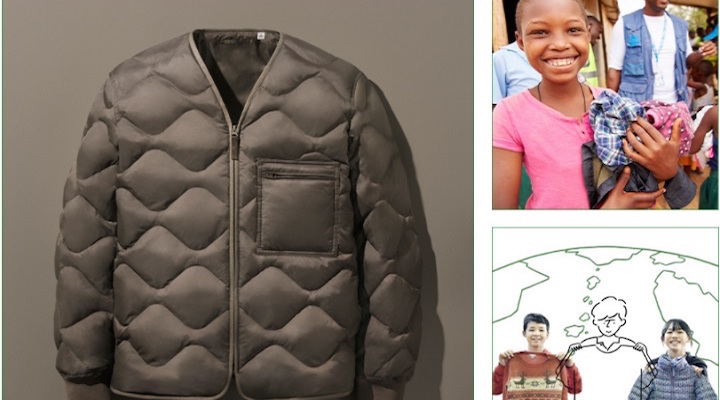 Clothing retail giants Zara and H&M have each introduced schemes to tackle garment waste problems. Now, Japanese fast-fashion retailer Uniqlo has announced plans to join this attention to sustainability by introducing its own garment collecting and recycling initiative.

Uniqlo has launched Re.Uniqlo, a circular sustainability program that collects Uniqlo clothing from both its Uniqlo and GU retail stores that are no longer needed by customers to give them new life by recycling the material to make new clothing or make new raw materials.

The company said the initiative is a step towards reducing waste, carbon-dioxide emissions and resource consumption throughout the product lifecycle.

The first item under the Re.Uniqlo scheme is the Down Recycling Project which converts collected Uniqlo clothes into new Uniqlo items, making them part of new products or 100 per cent recycled down jackets.

The project has produced its Recycled Down Jackets where all of the down and feather used on the new products come from the 620,000 used jackets collected from customers around Japan. These will launch in Singapore on November 9.

According to Uniqlo, it will initiate a new down product collection campaign in stores across 21 markets, kicking off in Singapore on October 12.

Meanwhile, H&M Group said its garment-collecting campaign has surpassed even its own 2020 goal to collect at least 25,000 tonnes of used clothing a year.

The group said it collected more than 29,005 tonnes of garments through its in-store network of take-back points last year, a 40 per cent increase from 2018.

“To address climate issues, the H&M Group has the ambition of reducing our impact both within and outside our own operations,” the H&M Group media team told Inside Retail.

“We have, together with external experts and scientists, set goals for our climate work and have committed to become climate positive throughout our entire value chain by 2040 at the latest,” the team said. “That means we will reduce more greenhouse gas emissions than our value chain emits  — all the way from cotton farms to the customers’ washing machines and the recycling baskets.”

The group said it has always wanted to include its customers in its initiatives, an example of which is the garment collecting campaign.

“H&M also wants to inspire and help customers to keep their garments in use for as long as possible and give them an easy option to collect their used garments when they are no longer wanted,” the team said. “We have therefore developed several initiatives, either through in-store repairing services, garment collecting in stores, advice when washing their garments, or using rental and re-commerce options, to mention a few examples.”

H&M said its unsold products are primarily used in their original form and will be donated to a selected charity or organisation or will be put up for re-use by a selected re-use/recycling company.

“We also actively move garments to stores where we see a greater demand,” the company’s media team said. “In exceptional cases where no internal solutions are feasible we consider external buyers of our overstock.”

According to Zara owner Inditex, promoting textile recycling is essential to achieving sustainable development in the sector.

“The use of recycled raw materials decreases the production of virgin raw materials,” the company said. “This product reduces the consumption of water, energy and natural resources while also reducing the volume of textile waste by transforming it into a new recycled material.”

With today’s technology only allowing the textile recycling of garments that are 100 per cent cotton, wool or polyester, the company said it has been collaborating with research projects that will allow more types of fabric to be recycled in the future.

Inditex said it has collaborated with MIT, creating the MIT-Spain Inditex Fund for Sustainability, to promote initiatives from Spanish universities or research centres that could help advance the circular economy.

“The aim of this project is to ensure that in the future, used garments which cannot be reused, can be transformed into new garments,” Inditex said.

Last year, Inditex’s executive chairman Pablo Isla said that by 2025, 100 per cent of the cotton, linen and polyester used by all eight of its brands will be organic, sustainable or recycled.

H&M had earlier announced its goal of using only recycled or sustainably sourced material by 2030.

“We will continue to work hard on every action that makes us reduce our footprint and reach our goal to become climate positive,” company CEO Helena Helmersson said.

She said sustainability work is an integral part of the whole business and includes every area of the company, hence its growth targets and its goals have equal weighting, live side by side and are entirely interconnected.

The group also recently joined the Uniting Business and Governments to Recover Better statement, the latest initiative of the UN Global Compact.

The Recover Better statement, signed by around 150 companies, is a call to action for governments and policymakers to reimagine a better future grounded in bold climate action.

“It is in extraordinary situations, such as this current pandemic, that we see how interconnected human health and planetary health are.”

According to H&M, to become climate positive, clothing chains also need to change how its products are made and enjoyed.

About 70 per cent of a garment’s climate impact arises during the manufacturing process itself. Making fibres, processing materials, dyeing and fabricating requires a lot of energy.

“We make tough demands on our suppliers, and we also help them to switch from fossil-based to renewable energy sources such as wind and solar,” H&M’s team said. “For example, we are currently implementing energy efficiency programs throughout our supply chain in close cooperation with our business partners.

“We also work on putting pressure on and collaborating with governments and authorities. This is a way to create positive changes beyond our industry.”