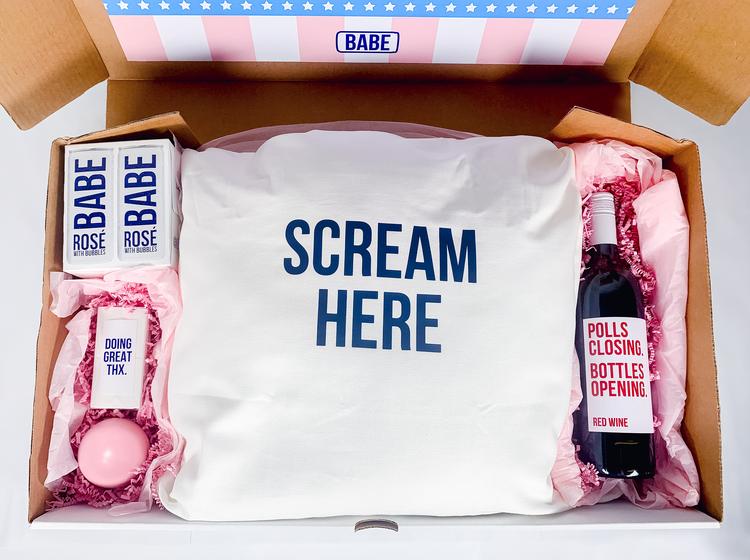 It’s been another weird week in retail. Babe Wine created an “Election Night Survival Kit,” a Pennsylvania-based winery released the perfect beverage to sum up the year and KFC delighted us all with the re-release of its fried chicken-scented fire log.

This election night is sure to be unlike any we’ve seen in the past as more people opt for alternatives to in-person voting. Some are predicting firm results won’t come out for days, or weeks, following Nov. 3.

So to help calm our minds around the uncertainty of everything, Babe Wine released an “Election Night Survival Kit.”

“November 3rd is going to be wild AF, but BABE is here to help you get through it. This kit has everything you need if [s—] gets real,” the company said on its website.

The kit includes: a “Scream Here” pillow, a squeeze ball aimed to “occupy your fingers so that you don’t go off on Twitter,” a pack of “Doing Great Thx” tissues, a bottle of “Polls Closing. Bottles Opening” red wine and a four-pack of rosé. Forget election night. These are the essentials we need for every day of 2020.

All of this will set customers back just $29.99, which might explain why the product sold out so quickly. But don’t fret, according to the company’s website, it’s restocking now and making products available again soon.

And while the Election Night Kit from Babe Wine might serve us well for an evening, it won’t carry us through the rest of the year.

Which is why we’re reaching for one of the latest releases from Grovedale Winery: Sh!tshow Wine.

The Pennsylvania-based winery’s owner, Jeff Homer, explains that the company’s winemaker came up with the idea to help bring a smile to some of life’s less-than-pleasant moments. “At the time, we were thinking of situations like your friend goes through a divorce, or when your project at work fails. There’s no way we could have predicted how crazy 2020 would become, but it does seem like it’s the perfect gift to capture the times. That’s why we made our tagline ‘A fine wine for the times,'” Homer said.

The wine itself is made from a blend of cabernet sauvignon and merlot from Washington and aged in 100% American Oak barrels.

On its website, it displays different sh!tshows to raise a glass to, including political, personal, professional or “just celebrating the general sh!tshow that 2020 has been.”

But Homer acknowledged the fact that despite the jokes, the events of this year have taken a real toll on many people, which is why the company is working on a collaboration with a nonprofit organization that will ensure a portion of all proceeds go toward increasing mental health awareness and helping provide access to those who need it. “Ultimately, we want to give people a way to laugh at the different sh!tshows we all face but also to make sure that people know they truly are not alone,” Homer said.

This year has felt never-ending and it’s been difficult to think about anything other than current events. But, as a break, let’s take a quick walk down memory lane.

Remember 2018? Mall-goers battled for stuffed animals at Build-A-Bear’s Pay Your Age event, we were all imagining what it’d be like to “go” on the Louis Vuitton toilet, your kids wouldn’t stop asking you about L.O.L Surprise Dolls and KFC unveiled a fried chicken-scented log. It was a simpler time.

Well, we can’t promise another luxury “loo” fantasy, but we can assure you chicken-scented logs will once again become a reality this year.

KFC announced earlier this week it brought back the fried chicken-scented 11 Herbs & Spices Firelog for its third consecutive year, which retails for just under $16. The product will be sold exclusively in Walmart stores and online and will make its Canadian debut later this year.

“[I]n a year of unpredictability, nothing is more comforting than knowing that you will once again be able to cozy up next to a fried-chicken scented fire while enjoying the mouth-watering taste of KFC’s world-famous fried chicken,” the company said.

Honestly, in a time like this, if a fried chicken log will bring some sense of normalcy and nostalgia into your lives, go ahead and buy 10. That’s something we could all use more of right now.

Nobody’s coming over anyway this year so why not do whatever the heck you want with your fried chicken-loving self.