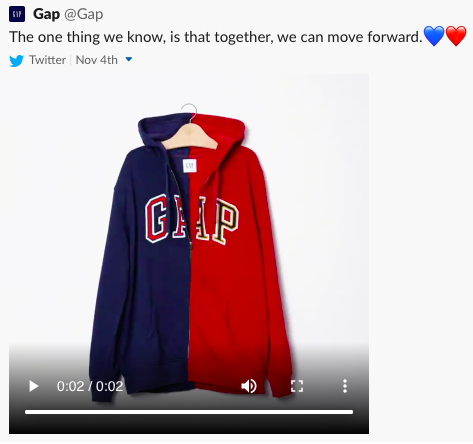 It’s been another weird week in retail. Gap tried to magically unite the country through a sweatshirt, Stouffer’s announced it would release lasagna-inspired merchandise and DW Home created a candle that will fill your homes with the comforting scents of Thanksgiving.

Gap interjected itself into the fraught political climate around the presidential election (still undecided as of press time).

In a Wednesday tweet that has since been deleted, the apparel brand showed a half-red, half-blue sweatshirt getting zipped up to symbolize togetherness. The video carried the message, “The one thing we know, is that together, we can move forward.”

It didn’t take long for others to respond.

yay we can just walk sideways depending on the city we’re in https://t.co/W8qyxfb05s

I will take my anxiety out on The GAP

Gap removed the tweet the same day and a company spokesperson told The New York Times, “[we] remain optimistic that our country will come together to drive positive change for all,” and noted that the hoodie was not actually for sale.

The stunt follows other calls of unity from brands during this election season. Last week, Oreo debuted a video featuring an elephant stuffed animal and donkey stuffed animal, depicting the Republican and Democratic parties, coming together to enjoy milk and cookies.

While consumers have called on brands and retailers to be more vocal about issues they care about, it highlights the fine line they must walk when doing so. In 2017, Pepsi debuted its “Jump In” ad starring Kendall Jenner. In the spot, Jenner was depicted as easing tensions between protesters and police by handing over a can of Pepsi. The ad was taken down after one day following a wave of backlash.

Stouffer’s, the brand known for its lasagna and other ready-made meals, announced it would be releasing a merchandise collection later this month.

According to the brand’s social media posts, the collection will be available in the Stouffer’s merch store beginning Nov. 17 and will include items like T-shirts, blankets and fanny packs.

But what could be better than a fanny pack with an image of your beloved lasagna on it? A fanny pack that’s built to keep your real-life piece of lasagna warm. The pouch is insulated, according to Delish, so your lasagna can stay warm while you’re running errands or just sitting on the couch doom scrolling for hours on end.

During a time where we could all use a little comfort in the form of food and food-themed products, this collection hits all the right notes.

DW Home releases candle filled with the scents of Thanksgiving

While it may feel like time has stalled this week, we are moving closer to the Thanksgiving holiday with every passing day.

But if you’re too occupied screaming into a pillow and hiding under a blanket (no judgment over here) to focus on the biggest feast of the year, this brand created a candle to fill your home with the same comforting scents.

The product costs $14 for a medium-sized candle and $18 for a large. They have a burn time ranging between 33 and 56 hours, which means there’s a very real possibility you could burn through this candle before the presidential race is officially called, so you better buy a few.

According to one reviewer it “Smells just like Thanksgiving dinner at Grandma’s!” while another writes, “I really got this out of curiosity but I’m obsessed! It actually smells like your house at Thanksgiving.”