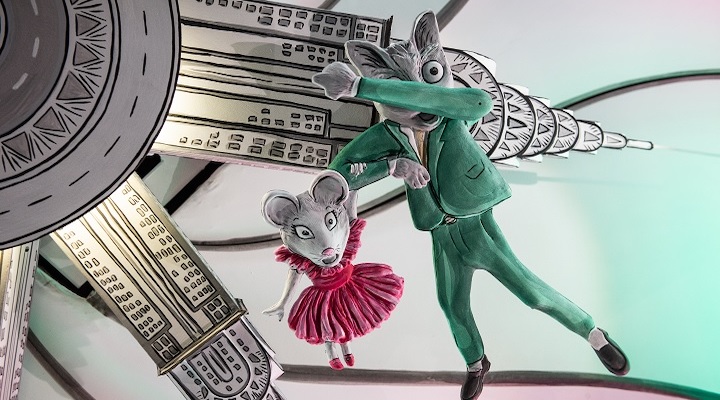 David Jones marked the launch of its 182nd Christmas season nationwide with the unveiling of its annual animated Christmas windows at its newly redeveloped Elizabeth Street flagship store, and the showcasing of its 2020 Home of Christmas campaign.

The retailer’s storefront windows features scenes from Hess’ children’s book “Holiday Heist”, the fourth installment of her “Claris, the chicest mouse in Paris” series which tells the story of the courageous and stylish mouse Claris taking on a cheeky cat burglar in New York City.

According to David Jones, specialists at Sydney’s Macgyver Studios spent more than 6,500 hours working on the hand-crafted characters packed with hidden surprises, vignettes and three-dimensional detail at all eye levels.

“As a child, one of my favourite memories was the excitement of seeing the David Jones Christmas windows,” Hess said.

“I remember being five years old with my face squished up to the glass looking in with absolute wonder! If someone had told my five-year-old self that one day I will be an author and my Christmas book will be the entire windows of David Jones, I would never have believed them.”

The Melbourne-based Hess, who is an internationally renowned fashion illustrator who has worked with the world’s famous fashion brands including Louis Vuitton, Dior and Givenchy, among others, said seeing Claris’ Christmas story come to life across the enormous David Jones Elizabeth Street store windows is her every Christmas wish come true.

“Famous for collecting shiny and colourful objects, the use of the Bowerbird in the David Jones Christmas creative draws a joyful parallel to tree decoration and gift giving,” the company said in a statement.

“The campaign can be enjoyed instore and online, across gift wrap, gift cards, visual merchandising and store windows as well as via a range of exclusive gifts by David Jones with 10 per cent of profits donated to David Jones Community Partner, the Australian Literacy and Numeracy Foundation.”

David Jones CEO Scott Fyfe said the department store has been celebrating with Australians since 1838 and this year is no different.

“The unveiling of the animated Christmas windows at the Elizabeth Street flagship is a highlight on the calendar for us, seeing David Jones customers of all ages experience the magic of the season,” Fyfe said.

“We are delighted to be welcoming our customers instore and online for the holidays and look forward to providing our signature David Jones service, however they choose to shop with us.”

David Jones said to customers young and old who wish to meet with Santa, they have schedules for both an instore and virtual meeting with safety measures in place. They have also introduced the David Jones North Pole Hotline to assist with calls.

The company said all Christmas photography at all their stores this year will be socially distanced with the use of props and backdrops, and managed in line with current government health and safety advice with the onsite assistance of David Jones social distancing elves.

This Christmas, the David Jones grand piano will be installed on the ground floor of David Jones flagship stores around Australia and established and emerging musicians will be playing every weekend in November and December.

New to the Christmas program at David Jones’ Elizabeth Street store is ‘Breakfast with Santa’, an event hosted in sessions of small numbers for children and their families to meet Santa in person and hear a Christmas story with their name featured in the story line.

A chance to meet Hess in person in early December will also be made available to her fans with a book signing event at the store.