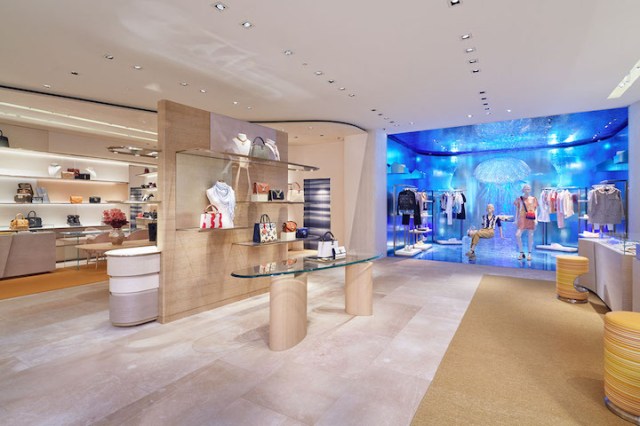 Louis Vuitton Japan has unveiled a completely new look for its Namiki-dori Ginza store, the luxury retailer’s second flagship to house a cafe.

The store design is a result of a collaboration between two architects – Jun Aoki and Peter Marino – who were behind the famous design of the Louis Vuitton Osaka flagship.

Located in the Tokyo Ginza Asahi building, the revamped outlet spans seven floors. Its external design was inspired by the water surface of Tokyo Bay, with the exterior designed by Aoki, featuring two-layer glass walls resembling waves of water.

Upon entering the store, giant jellyfish are carefully displayed, “floating” inside the store. Other water-related elements can be found inside, including in curved counters, spiral staircases and rounded furniture on the first floor, which houses seasonal items and latest collections.

The second floor is home to leather goods and fragrances, while the third floor and fourth levels offer women’s and men’s ready-to-wear and leather goods. The entire sixth floor is dedicated to a private salon for loyal customers, its design featuring warm colour tones.

Louis Vuitton Namiki-dori is scheduled to open its door to the public on Saturday (March 20). The store first opened in 1981 as its first directly managed store in Japan.