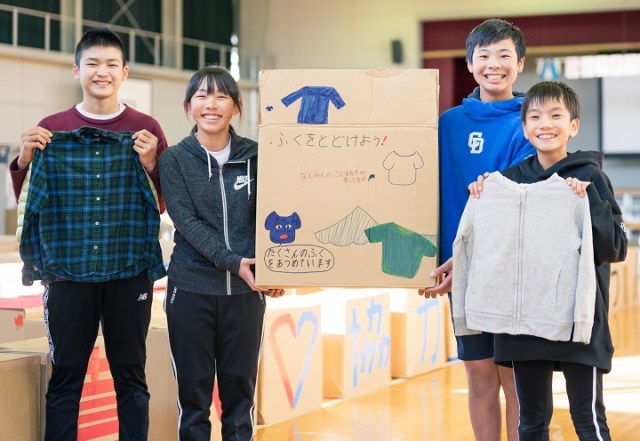 The children were able to collect about 320,000 garments in 2020 alone, a good portion of which were delivered to refugee camps.

“Through our business, we hope to contribute to the sustainable stewardship of the environment and responsible development of society with a focus on the planet, people and community,” a Uniqlo spokesperson said.

“One of our targets is to support children and the youth through promoting education on environmental awareness and social participation.”

The Power of Clothing Project, which started in Japan in 2009, targets students in elementary schools, junior high school and high schools in the country. Children under 18 donate or collect clothing donations by Fast Retailing’s Uniqlo and GU clothing chains.

Only about 51 schools initially participated when the project was in its early stages and between 2009 and 2012, about 80,000 pieces of clothing were collected. In 2013, Uniqlo formalised the activity and officially launched the project as it exists today. Last year, the project was extended to France, Thailand, Korea and the United States.

“We set up a system in cooperation with the local primary school where our students could visit their classes directly and ask the younger children for their help. Working with the younger students also gave them the valuable opportunity to collaborate with children from different age groups,” said a teacher in one of the participating schools in Japan.

“They experienced a real sense of accomplishment. They could feel that their actions were helping people around the world. This was also a chance for them to think about how privileged their own lives are.”

A participating high school student told Inside Retail: “I was happy I could collect a lot of clothing. The work was hard, but I felt it was worthwhile and when I finished, there was a great sense of achievement. I think that was probably because it was something I was doing personally that would help other people.”

Uniqlo has been collaborating with the United Nations Refugee Agency over the years and has donated 41.11 million items of clothing to refugees and displaced persons in 75 countries and regions around the world.

“Through our global partnership with UNHCR, we aim to donate approximately 7 million pieces of clothing per year,” the company said.

“Clothes that are unwearable were turned into solid fuel and automobile soundproofing materials to ensure that nothing goes to waste.”

It recently introduced Uniqlo’s Re.Uniqlo, a circular sustainability program that collects Uniqlo clothing from both its Uniqlo and GU retail stores that are no longer needed by customers to give them new life by recycling the material to make new clothing or make new raw materials.

According to the company, the initiative is a step towards reducing waste, carbon dioxide emissions and resource consumption throughout the product lifecycle.